The international symposium 'Pyramids and Progress: Perspectives on the Entanglement of Imperialisms and Early Egyptology (1800–1950)' will be held in Leuven & Brussels (Belgium) on 8–10 November 2021.

The programme of the conference can be downloaded here: 2021-11-8_10_SymposiumProgramme.pdf

The abstracts can be downloaded here: 2021-11-8_10_SymposiumAbstracts.pdf

The covid regulations regarding international travel to Belgium can be downloaded here: Travel-to-Belgium_Covid-regulations.pdf

The emergence of the discipline of Egyptology, traditionally set in 1822 when Champollion deciphered the Rosetta Stone, is intrinsically linked with nineteenth century imperialist endeavours culminating in the formal British protectorate of Egypt. This foreign dominance only came to an end after the 1952 revolution. The discovery of the Rosetta Stone was itself the result of the Napoleonic campaign to Egypt, which effectively reflects the confrontation between French, British, and Ottoman imperialist aspirations.

The role of imperialistic competition in the development of Egyptology as a discipline is still poorly understood. At the same time, while many modern historians working on global imperialism have a keen interest in Egypt, Egyptology is hardly prominent in their work. However, the degree to which imperialistic strive went hand in hand with an interest in and exploitation of the pharaonic past, is reflected in books like John Ward’s Pyramids and Progress (London, 1900), which deals with how the generosity of the British empire restored Egypt to the glory of its pharaonic past by technological innovation.

At a time when the European and American elites surrounded themselves with Empire style furniture, collected Egyptian antiquities, or travelled to Egypt to admire its monuments, a natural interest emerged in fostering political, diplomatic and commercial involvement in the land on the Nile. The imperialist competition between Britain, France, and Germany expressed itself, among other things, in the creation of colossal museum collections and of the first academic chairs in Egyptology. This tendency was by no means an exclusively Western phenomenon: the Ottoman pashas and khedives also aspired to create a national museum collection and to protect Egypt’s heritage. Later the grandeur of ancient Egypt also became a point of inspiration for Egyptian nationalists. It is pre-eminently a period of political transformations, with both vanishing empires (Austria-Hungary, Ottoman Empire) and emerging ones (USA). Smaller nations played their own role on this big international stage, such as Belgium with its expansionist policies which led to a proportionally strong foot on the ground in Egypt during the late nineteenth to early twentieth centuries.

Imperialism in this period is an ambiguous and dynamic concept that manifested itself in many ways: from formal and informal imperialisms with military, political and diplomatic components to various kinds of commercial and industrial expansion. The ways in which imperialistic aspirations expressed by both western powers (Europe and USA) and empires in the eastern Mediterranean (Ottoman Empire and Egypt) were entangled with the scholarly ambitions of intellectuals interested in ancient Egypt form the topic of this symposium to be held in Leuven and Brussels, Belgium, on 8–10 November 2021 (KU Leuven & Royal Museums of Art and History). Four angles will be used to focus on the debate: structures, actors, networks and discourses.

Structures include government agencies, the diplomatic corps, banks, commerce and industry, political organisations, scientific institutes and museums. The interaction between the Ottoman Porte and the Egyptian viceroys representing him on the one hand, and western stakeholders on the other is of paramount importance. Exchanges, mutual reinforcements, but also tensions and conflicts within and between structures are relevant issues.

Individual actors functioned within this framework, but also helped to shape it, and in many cases they exerted their influence in different domains. An example is Lord Cromer, the British Consul-General under whose tenure the first Aswan dam was built, but who also was among the founding fathers of the Archaeological Survey of Nubia, which aimed to document the threatened monuments in that part of the Nile Valley.

To understand the functioning of these structures and actors, and the networks in which they operated, it is vital to study the discourse of the time. Here, political, economic, religious, and scholarly discourses are deeply intertwined. For instance, the positivist emphasis on ‘progress’ could express itself in terms of economic, technological, and moral development, but also in terms of an expected evolution of human culture.

This symposium on the eve of the 200th anniversary of the decipherment of Egyptian hieroglyphs aims to cast wide open the discussion between modern historians and Egyptologists, and to take stock of two centuries of political, economic, and scientific entanglement in Egypt.

11.30–11.55am Sandra Veprauskiene: 1861–1862 Archaeological endeavour of Count Michał Tyszkiewicz up the Nile river
11.55am–12.20pm Miguel Á. Molinero Polo: Diplomacy and Egyptology in the 1880s: The perspective of the Spanish Vice Consul Eduard Toda i Güell
12.20–12.45pm Ryan Nutting: “I…secured some interesting and genuine Egyptian relics for the museum at Forest Hill”: Frederick Horniman’s collecting and interpretation of Egypt in the late nineteenth century

2.15–2.40pm Athena Van der Perre: Jean Capart and the quest for Nubia
2.40–3.05pm Cynthia May Sheikholeslami: J. Morton Howell and American diplomacy and archaeology in the 1920s
3.05–3.30pm Annelies van de Ven: Self, state and science: Exploring the tensions of a mid-20th century Coptologist in the Doresse archives

4.10–4.35pm Heba Abd el-Gawad & Alice Stevenson: Collecting Egypt: Centring Egyptian communities within colonial practices and legacies of British archaeology
4.35–5.00pm Wendy Doyon: What imperialism does & does not tell us about the history of Egyptology: The case for Egypt’s political economy as a research lens

8.15–9.00am Registration & coffee
9.00–9.25am Uroš Matić: The Hamitic question: Egyptology and scientific racism at the forefront of imperial politics
9.25–9.50am Emmet Jackson: An’other’ other: Ireland and Egypt
9.50–10.15am Thomas L. Gertzen: Empires of mind? Self-reflection of German Egyptologists in the historiography of ancient Egypt
10.15–10.40am Stuart Mathieson: Empire, Egypt, and Exodus: British science and religion in the late 19th and early 20th century Near East

STRUCTURES
8.30–9.00am Registration & coffee
9.00–9.15am Bruno Verbergt, Director RMAH
9.15–9.40am Dina Ishak Bakhoum: The relevance of the actions and actors of the Comité de Conservation des Monuments de l’Art Arabe to the discipline of Egyptology
9.40–10.05am Ian Oswald Trumble: Cotton bales to canopic jars: Agency in Egyptology through the commercial activities of Barlow & Jones, Cotton Spinners and Manufacturers Ltd Manchester and Bolton, England
10.05–10.30am Harco Willems: Egyptology and sugar cane: The involvement of western entrepreneurs in Egyptology in the Mallawī region in the late nineteenth and early twentieth centuries
10.30–10.55am Carole Jarsaillon: The meeting reports of the Service of Egyptian Antiquities: The diplomatic stakes of managing archaeology in Egypt (1914–1936)

Keynote speech
11.15am–12.15pm Floris Solleveld: Egyptology and the expansion of world history: Exploration and historical comparison in the network of Baron Bunsen 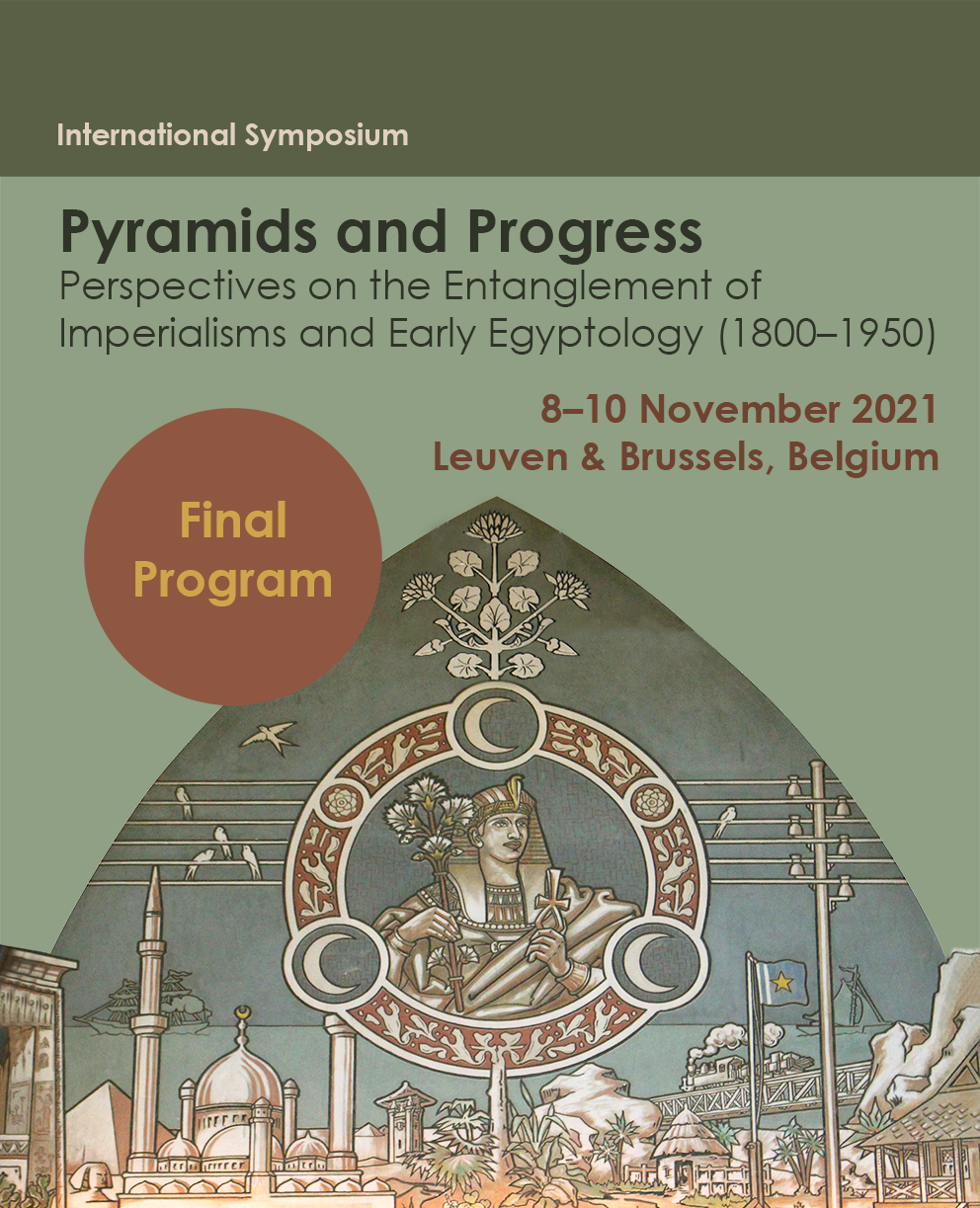 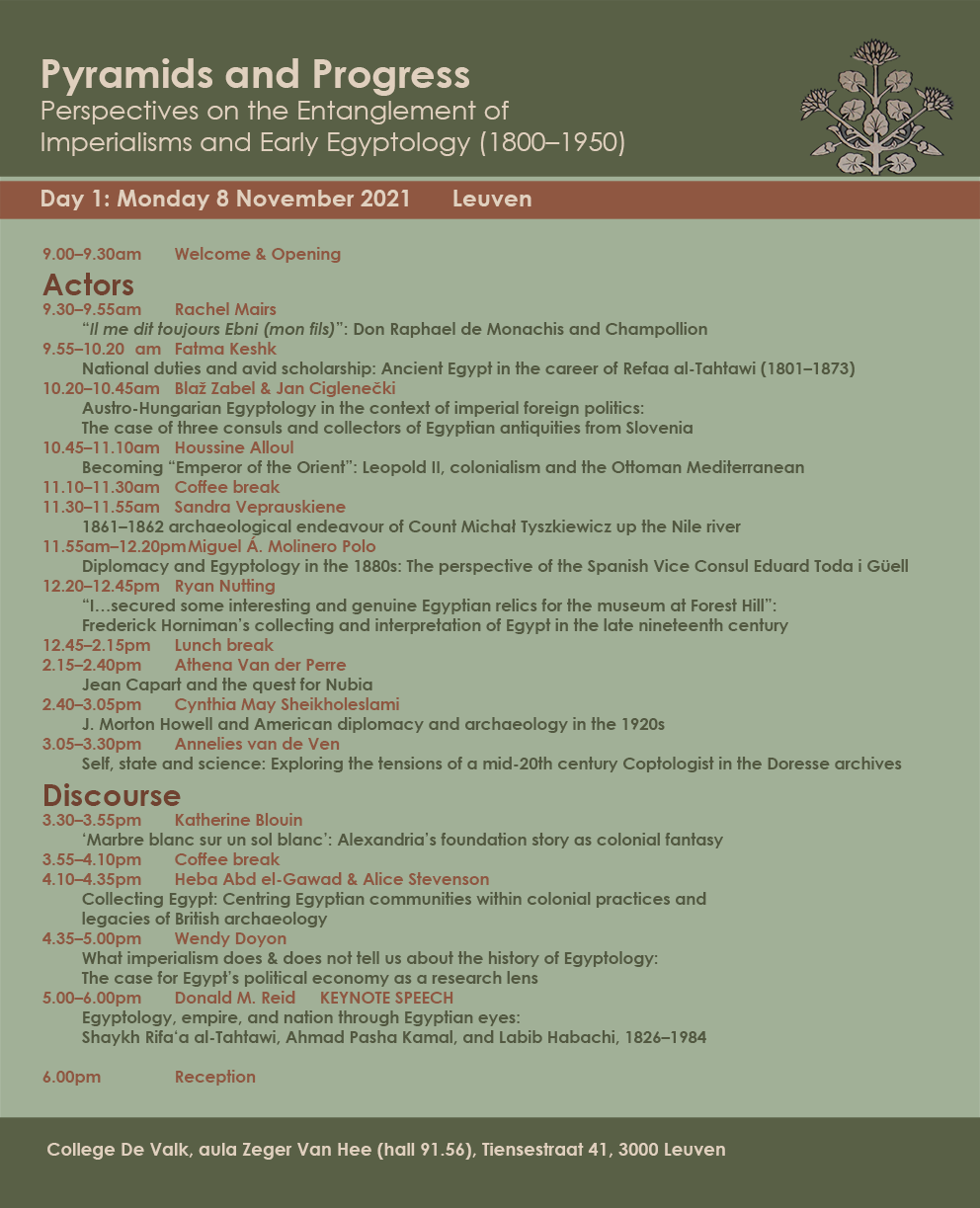 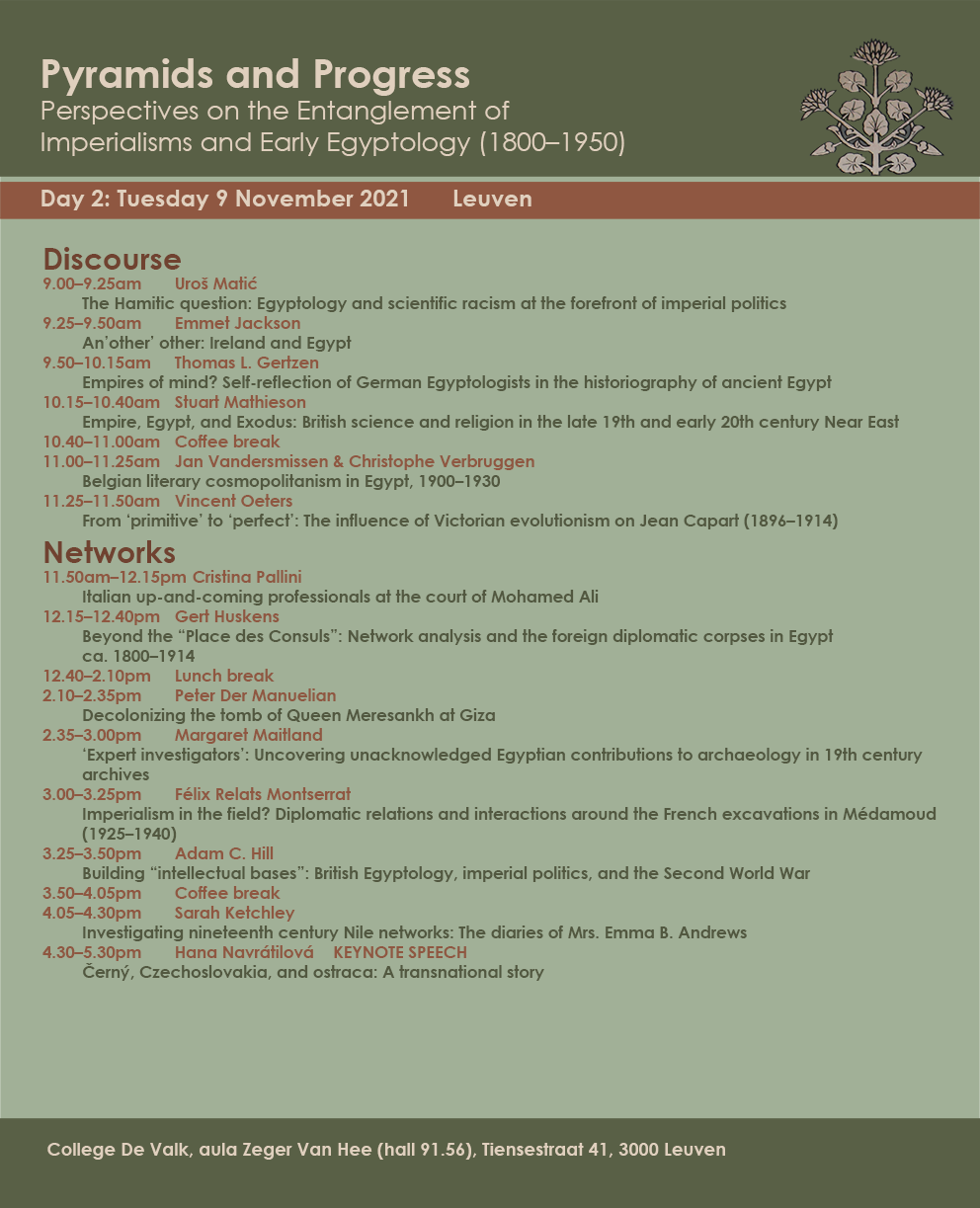 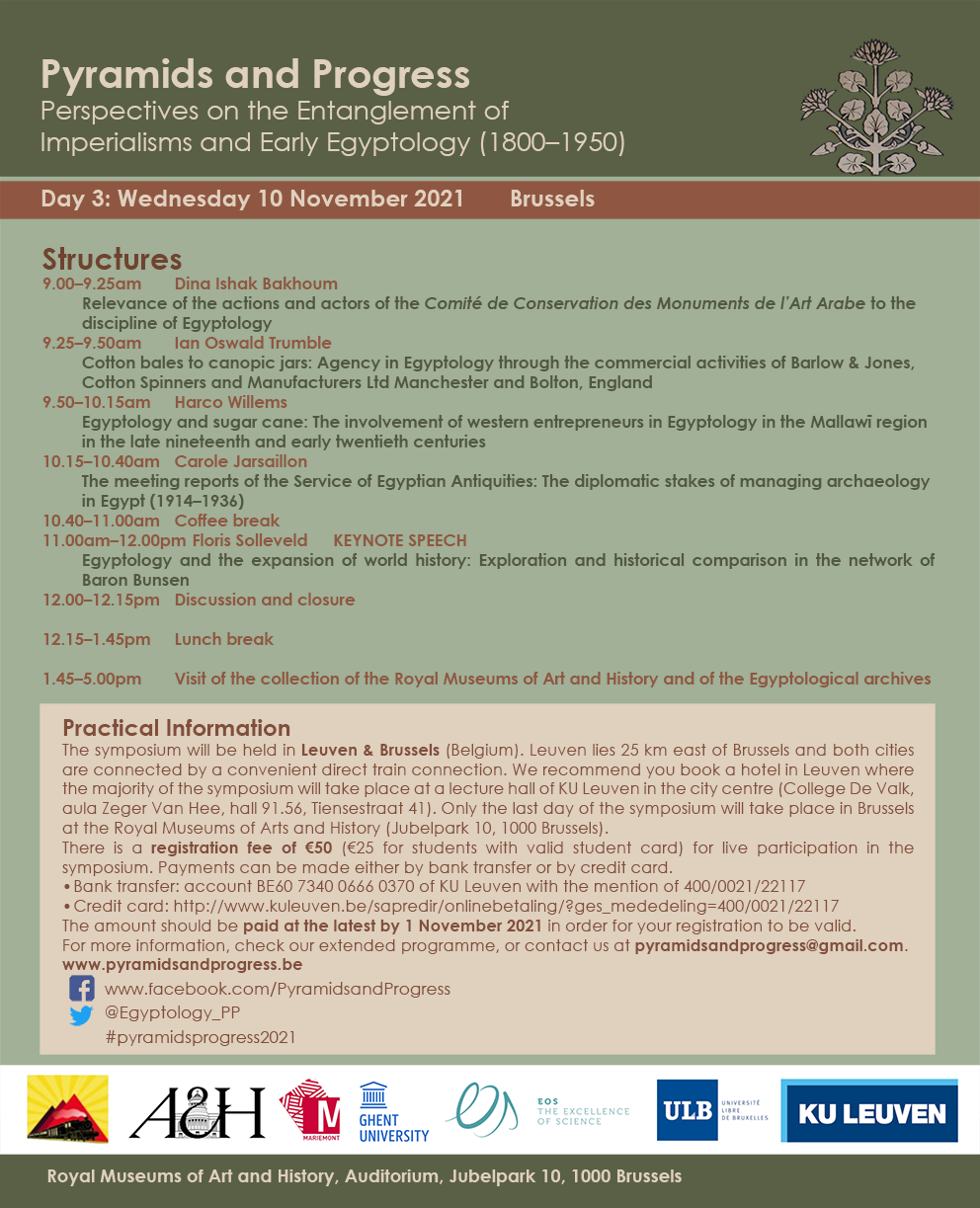