Gert Huskens: “The greatest dealer of Egyptian antiquities in the world” and his Belgian clientele 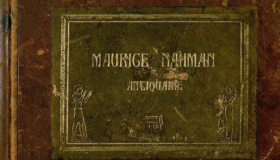 Cairo. February 24, 1929. While local merchants of all kinds and trades were putting up their shops, Belgian Egyptologist Jean Capart entered one of Cairo’s many antiquity shops. In contrast to present-day tourists who usually head back home with sets of mass-produced mini Tutankhamun busts, Capart knew exactly what to expect when he headed for the shop of Maurice Nahman. For several years now, he had been a respected client of this shop at 27 Sharia el-Madabegh.

However, before he could have a glance at the collection, Capart was first ought to fulfill his ceremonial duties. A pen was put into his hand and like all honorable guests before him, he was asked to put his signature in Nahman's Visitor Guestbook. Unlike other distinguished visitors such as John D. Rockefeller jr. or prince Prajadhipok of Thailand who simply wrote down their names, Capart wanted to leave an impression. Showcasing his passion for Egyptology, he added a transcription of his name in carefully drawn hieroglyphic signs.

This remarkable gesture by Capart, but also the traces of many other visitors have reached us through the Nahman Visitor Guestbook. A document which allows in the first place to analyse the network of this high end antiquity dealer in all its complexity. No less than 550 signatures, written down between 1918 and 1976, offer a unique view on the clientele of this famous antiquity dealer. At Pyramids & Progress, this source can be used to question already existing analyses of the relationship between Capart and Nahman, his reliance on antiquity dealers, his research praxis as an Egyptologist, etc.

Since Capart called Nahman “The greatest dealer of Egyptian antiquities in the world” shortly before the latter died in 1948, a re-examination of their professional relation could also possibly provide a more profound view on the formation of the discipline of Egyptology in the first half of the twentieth century. Recent research on the provenance of the relief block of Ptahmose which is currently held at the Nasher Museum of Art of Duke University has already proven the links between Capart and Nahman.

The guestbook also shows traces of a visit by Marcelle Werbrouck, Suzanne Berger and Marcelle Baud. Since Werbrouck and Berger served as assistants to Capart, this visit could be integrated in research on the level of independence of these female Egyptologists. The presence of Marcelle Baud is in its turn interesting because of her position as secretary for France of the Fondation Reine Elisabeth. A final signature which is worth additional research is the signature of Belgian industrialist baron Édouard Empain. His visit could potentially tell us more about Egyptomania and archaeological interest within the Belgian imperial elite.

In sum, the information provided by the Nahman Visitor Guestbook demonstrates how Pyramids & Progress can put one of its core ambitions into practice. Not only does it give a very relatable account of the daily life of an Egyptologist, it also shows which kinds of sources can help us to reconstruct Egyptological networks at play at the time. For now, the signatures of the aforementioned Belgian actors are at least an indication of Belgian interaction with Nahmen, but hopefully future research can further deepen our understanding of the entanglements of Belgian Egyptology with the world of Egyptological research in general.

Curious whether you can recognise a signature of one of Nahmans famous guests? Take a look for yourself over here!