Jan Vandersmissen: Entanglements of history of science and Egyptology: Frans Jonckheere and the upcoming study of ancient Egyptian medicine in Belgium (1930-1956) 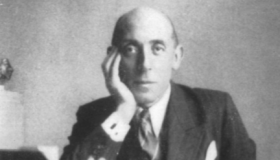 On Friday September 13, 2019, P&P-member dr. Jan Vandersmissen will give a lecture at the 1st Conference of ​the International Academy of the History of Science: Science in different cultures and civilizations - Towards a transcultural history of knowledge which will be hosted in Athens, Greece from 12-15 September 2019. The title of his lecture will be Entanglements of history of science and Egyptology: Frans Jonckheere and the upcoming study of ancient Egyptian medicine in Belgium (1930-1956).

Frans Jonckheere was a medical practitioner, born in Brussels on 30 June 1903 and deceased in the same city on 10 March 1956. His scientific career has hardly been studied. However, it offers the opportunity for a case study on the interweaving of history of science and Egyptology in the 1930s to 1950s, at a time when both disciplines were fully implicated in a process of professionalization, reflected in the formation of specialized institutions and expert communities.

We investigate how the young surgeon, a graduate of the Université Libre de Bruxelles, after passionate literature study and a trip to Egypt in 1939 was taken under the wings of the renowned Egyptologist Jean Capart (1877-1947) who encouraged him to conduct research on ancient Egyptian medical practices. Under Capart's impulse Brussels had become an international meeting place for Egyptologists. The collections of the Royal Museums of Art and History and the research projects of the Fondation Egyptologique Reine Elisabeth (FERE, founded in 1923) offered Jonckheere opportunities to make contributions to medical Egyptology.

We pay attention to the impact of Jonckheere's experimental work with mummies and his application of X-rays, which provided new insights in mummification techniques and the conservation of human remains. We also investigate his analyses of a series of papyri, enabling him to make a comprehensive prosopographic study of the physicians in ancient Egypt. Due to this work, Jonckheere grew into a respected scholar with international contacts. On March 5, 1952, he became a corresponding member of the International Academy of the History of Science.

Finally, we reflect on Jonckheere's structural mark on history of science in Belgium. After his death several institutions received donations from Jonckheere’s relatives, making possible the foundation of both the Jonckheere Prize for History of Science (Belgian Committee for the History of Science) and the Jonckheere Prize for History of Medicine (Académie Royale de Médecine de Belgique), the organization of a free course in the history of medicine (Ghent University), and project funds and library purchases for the FERE.

This paper is based on Jonckheere's publications as well as on recently discovered correspondence from the archives of the FERE (Brussels). Our research is part of the EOS-granted project "Pyramids and Progress: Belgian expansionism and the making of Egyptology, 1830-1952" – a collaboration between researchers from Ghent University, the Université Libre de Bruxelles, the KU Leuven, the Royal Museums of Art and History in Brussels and the Musée Royal de Mariemont in Morlanwelz.​