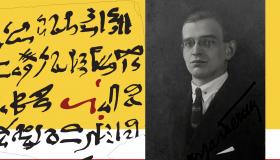 Abstract
Jaroslav Černý, the modern ‘scribe of Deir el-Medina’,  introduced Egyptology to the daily life of ancient Egyptians, and the ancient Egyptian daily life to the general public. But his career and Egyptological success were far from a foregone conclusion - he had to build resilience despite odds throughout his transnational life and career, when he became an exile and finally a stateless citizen. His international social network, developed over the years and surrounded by tenets of changing European and world politics, was essential for his professional and personal formation. Jean Capart, who promoted international networking of Egyptologists, hosted Černý at Semaines Égyptologiques, and the two scholars shared a deep interest in ostraca, unprepossessing inscribed sherds and stone flakes, but vital for reconstructing the life of the Egyptians. They also shared a vision of an international Egyptology, with regular meetings and scholarly information circulating without obstruction. These concepts did not come to an immediate fruition but remained important for Černý . At the end of his career Černý was a respected scholar, a retired Oxford professor and a friend and colleague to people from both camps of the Cold War, and from Europe, the US, as well as from Egypt. His was a quiet opposition to the polarized world, inspired also by a legacy of the interwar years, when he was among guests of Jean Capart.

Dr Hana Navrátilová is an Egyptologist with specific interests in the Egyptian New Kingdom, Egyptian historiography, and the history of Egyptology. She studied at Charles University in Prague, where she wrote theses on the Egyptian revival in Bohemia (2002) and a study on Egyptian historical thought (2006). A former project participant on the Topographical Bibliography at the Griffith Institute (University of Oxford), she is currently engaged in the recording and publication of visitors’ graffiti in the Pyramid complex of Senwosret III, Dahshur (Egypt), for the Metropolitan Museum of Art, and works on a new biography of Jaroslav Černý.