Lecture Harco Willems: The Second Congress of Orientalists in London (1874) Or: the early development of Egyptology in geopolitical perspective 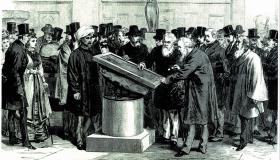 On Sunday November 10, 2019, 18h, P&P-member dr. Harco Willems will give the annual Cleveringa lecture at the Netherlands-Flemish Institute in Cairo, Egypt. The title of his lecture will be The Second Congress of Orientalists in London (1874). Or: the early development of Egyptology in geopolitical perspective

Egyptology, like all other scholarly disciplines, has gone through a slow process of professionalisation and institutionalisation. The image mostly conjured up by modern overviews of nineteenth century Egyptology focuses on inspired visionaries and adventurers who opened up ancient Egypt to European intellectuals with an antiquarian interest. Several of them evolved into great researchers, who with great endurance deciphered hieroglyphic writings that had for over a millennium and a half remained illegible. The so-called book of the Dead, at the time considered as “the Bible of the Old Egyptians”, was among the sources that attracted the most attention.

The romantic aura of early Egyptology is not incorrect. However, an underexposed feature is the geopolitical context in which the discipline could take root in academia. Ancient Egypt was, in fact, not an insignificant factor in the power game being played between France, Britain, and Germany. A meeting of a small group of Egyptologists during the Second Congress of Orientalists, which was held in London in 1874, was crucial for the development of Egyptology in subsequent decades, and even until today. This lecture will explore  the conditions under which the encounter took place, and show how Richard Lepsius was able to benefit from the possibilities offered by the then current nationalistic competition between the states of Europe.