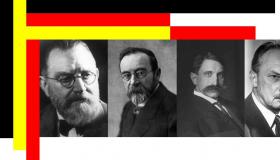 In the early modern history of Egyptology scholars might belong either to the “French” or to the “German” School, according to a contemporary bi-polar concept such as employed by Suzanne Marchand and others. Of course, “German” and “French” referred less to nationality and language than to certain methodological approaches. Belgian Egyptologists, like Jean Capart (1877–1947), might appear as intermediaries, not just geo-politically at the crossroads of “major powers”. However, the “German School,” or rather the “École de Berlin”, headed by Adolf Erman (1854–1937), was unwilling to compromise. He and his successors wanted to impose German methods, with “smaller nations” following suit.

A nationalist perception of scholarship was exacerbated when the German Egyptologist Baron Friedrich Wilhelm von Bissing (1873–1956) played a highly questionable role in the Belgian academic administration during the German occupation from 1914 to 1918. After the First World War when the English Egyptologist Alan Gardiner (1879–1963) proposed that Brussels become the new “capital” of international Egyptology (as the research of Jean-Michel Bruffaerts has documented), Hermann Grapow (1885–1967) in Berlin went so far as to seek the support of the Nazi’s in an attempt to regain German pre-eminence in the field, thereby endangering the lives of Belgian colleagues.

The lecture reviews the development of Belgian-German relationships in the history of Egyptology, scrutinizing the applicability of the bi-polar research concept for analysis of the traditions of “French” and “German” Schools. The concluding discussion focuses on the dilemma posed by the choice, when writing the history of Egyptology, between “national” approaches (to render the task manageable) on the one hand and, on the other hand, a trans-national perspective which risks over-simplification.