On 8 March 1930, this exact day some decades back in time, this issue of the Belgian magazine Le Soir Illustré was sold in book stalls all across the country (shown below). The cover shows a member of the party of queen Elisabeth firmly riding the back of a camel in the shadow of the Pyramids of Giza, offering to the Belgian audience a glimpse of the fascinating 'voyage en Oriënt' of its royals. Since this image perfectly illustrates the relationship between Egypt and Belgium in this period. A remarkable anniversary and a perfect day to present the activities of Pyramids & Progress!

Take a look at our social media accounts! 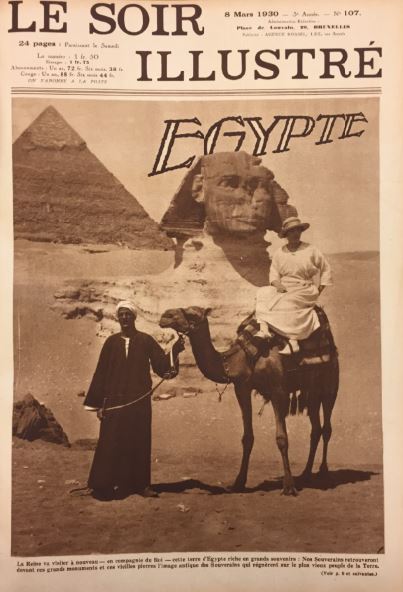 'Pyramids & Progress: Belgian expansionism and the making of Egyptology, 1830-1952' (P&P) aims at writing an interdisciplinary history of Egyptology analysing its emergence in the context of Belgian industrial and political expansionism towards Egypt which initiated almost from the very moment that the Belgian state was created in 1830.

In Belgium, Egyptology emerged later than elsewhere in Europe, but once under steam, it went through a rapid growth in the course of the first half of the 20th century. In the 1930s Brussels was occasionally even referred to as ‘the capital of Egyptology’. Pyramids & Progress investigates how this remarkable development unfolded.